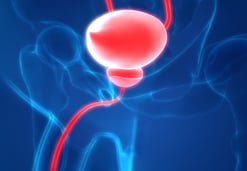 After radical prostatectomy (RP), nearly 5-10% of men may experience substantial issues with urine control. Immediately after surgery many men have issues, especially with stress leakage; however, most will regain an acceptable level of continence within 6-12 months of surgery. For this smaller group of men with persistent incontinence, however, urine control can be a substantial issue and some require additional intervention to restore continence. Urodynamics can be a helpful adjunct in this population.

Stress leakage is the most common issue after surgery and this is usually readily ascertained by the history and exam. This is often akin to female stress leakage, where UDS is often not needed in straightforward or clear-cut cases. An argument can be made that men with severe stress leakage after RP are candidates for an artificial sphincter and those with lesser degrees of leakage can be candidates for either non-operative intervention or possibly a male sling. UDS can be used as an adjunctive diagnostic tool in these men, especially if you cannot demonstrate leakage doing provocative maneuvers in the office, the history suggests minimal leakage or if the degree of incontinence he is experiencing is hard to ascertain.

Given that most cases of stress incontinence after RP will be diagnosed and managed without needing to perform UDS, what about the man who has had prior treatment for post-prostatectomy incontinence? In a situation where there is refractory, new onset or worsening leakage after a sling or an artificial sphincter, UDS is a great tool to determine if there is new onset urgency or even obstruction from a prior procedure.

Although the overwhelming majority of men with incontinence after RP have stress leakage, there are some that also have urgency incontinence or even a mixed incontinence picture. As with other cases where the exact diagnosis is unclear, UDS can be very helpful in sorting out the man whose complaints are unclear, vague or do not match your physical exam findings. Certainly, a man with new onset urge incontinence after RP won’t benefit from a sling or artificial sphincter and UDS can help make this diagnosis.

One final area where UDS can be helpful is in the man with a bladder neck contracture (BNC) after RP. This is a vexing condition to manage, as on the one hand a BNC can obstruct and lead to difficulty with bladder emptying, while on the other this can sometimes provide some resistance to stress leakage. In some men, either prior to intervention on a BNC or as part of planning if intervention is needed, UDS can be useful to see if the bladder is in fact obstructed, to what degree and also to assess the Valsalva leak point pressure. This is a situation where UDS is probably underutilized, but may be very helpful in determining how to manage a BNC.

Although most patients after RP have straightforward stress leakage, where an artificial sphincter is likely to the best means of restoring continence, there are some indications for UDS in this population.  In equivocal cases, cases of new onset urge or mixed incontinence, post-incontinence surgery incontinence and potentially with managing a BNC, UDS testing can be a helpful adjunct in the man who has incontinence after RP.