Should You Perform Urodynamics Before Female SUI Surgery? 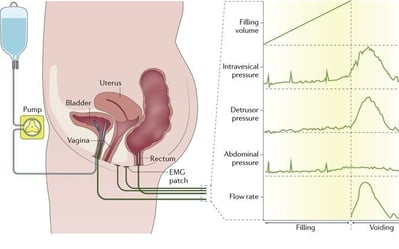 Surgical management of stress urinary incontinence (SUI) is a commonplace procedure, usually indicated on the basis of the clinical history and exam findings alone. In fact, Level I evidence from the VALUE trial suggests that urodynamics (UDS) makes no difference in the outcome of SUI surgery in straightforward cases.1 Nonetheless, in many situations UDS is a critical part of evaluating SUI patients for surgery; moreover, in some instances UDS will spare women surgery that may not be beneficial.2

One clear-cut area where UDS is very helpful is for the patient who has previously undergone surgery for SUI and/or pelvic organ prolapse (POP). These patients may present complex anatomy, obstruction from prior surgery, changes in bladder compliance, and a very high valsalva leak point pressure. UDS may help guide the decision as to what intervention(s) may be necessary in these patients.

The patient who complains of substantial stress leakage, but in whom you cannot demonstrate leakage, is another good candidate for pre-operative UDS. Unlike urgency incontinence, which is not always elicited during UDS testing, SUI is usually demonstrated during UDS. Performing UDS in such scenarios can often help indicate accurately if such patients really have stress leakage or another entity, and thereby guide therapy.

Considering pre-operative UDS for women with urgency, frequency, and urgency incontinence makes sense. Many of these patients have mixed stress and urgency leakage, some have frank overactive bladder only (OAB). Some with only urgency leakage may be mischaracterizing their symptoms. Others may have stress induced urgency leakage. In such patients UDS is critical to both determining which factors are contributing to the patient’s incontinence and directing appropriate therapy. For example, placing a sling in a woman with OAB is likely to make matters worse, so appropriately using UDS before surgery may be very helpful.

Finally, UDS is a key part in evaluating women who may have either urinary retention or neurogenic voiding dysfunction. In such cases you want to verify if the detrusor works normally and if bladder compliance is normal. Not only may such patients derive little to no benefit from SUI surgery, but also some may even be harmed. UDS may help stratify these cases as well.

Clearly many cases of SUI are straightforward and easy to diagnose based on history, exam, and simple bedside tests like the supine or standing valsalva test. Such cases do not need UDS before surgery as the VALUE study has shown.1 But there are many cases that are not straightforward, and UDS can be critically important to appropriate diagnosis and management: for example, patients who have had previous surgery for SUI or POP or who suffer from mixed incontinence or substantial urgency incontinence.

When you cannot tell if a woman has SUI — because the story doesn’t make sense, the exam doesn’t prove SUI, or the clinical situation just doesn’t add up — UDS is a great part of the evaluation. And finally, when there is known or suspected neurogenic voiding dysfunction or frank urinary retention, UDS is critical to the workup in these women.