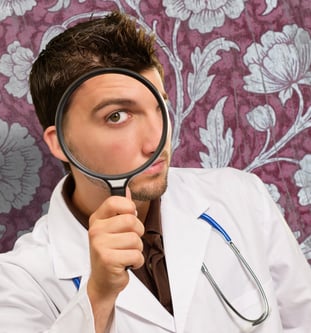 Proper quality control before and during urodynamics (UDS) is critical to obtaining optimal test results. There are several key maneuvers that should be performed before the study begins and in the event of issues during the test, several remedial actions that can be taken. The International Continence Society (ICS) has previously published on quality control during UDS and the work of both Blaivas and Abrams has expanded our understanding of both quality control and artifacts (Abrams, 2012). The reader should review the excellent manuscript from Abrams for further details, as much of this blog post refers to these works.

Before a study begins, there are three key parameters that must be assessed, as further described by the ICS. Foremost, the pressures measured by the bladder and rectal catheters must be in the range of normal values. By extension the detrusor pressure must also be physiologic. Secondly, each catheter should have small variations as the tracing is generated, due to normal physiologic functions and movements. A lack of such a readout suggests a catheter is not “live” and recording accurately. Finally, coughing should be performed before the test and periodically to make sure all catheters are working and the detrusor pressure is being correctly calculated. Troubleshooting these basic areas of quality control is critical (Abrams 2012):

During the study, a common area of confusion and artifacts deals with detrusor overactivity. This can occur either on its own or close to voiding. In patients with a rise in detrusor pressure and who are having urgency, it may be possible to stop the flow of fluid into the catheter and see if the detrusor will relax. Sometimes the patient will leak, which can be a key finding and a reason or the study; however, if the patient has overactivity, he or she should not be allowed to void and any leakage should not be considered a volitional void. This is probably one of the most common errors made in performing UDS and can lead to false findings, such as detecting obstruction when none is present.

Rectal contractions are a classic artifact that appear from time to time during UDS. Patients are usually unaware of these low-level contractions within the rectum. They will usually lead to a small rise in pressure on the abdominal catheter, but little change will occur in the vesical pressure and as a result, the detrusor pressure will drop when these happen. These can be ignored.

A variety of malfunctions and artifacts can occur with the catheters themselves during UDS. These include: catheter occlusion, catheter misplacement/displacement and catheter expulsion. A catheter can become clogged or occluded by kinking, the patient sitting on it, issues near the UDS unit itself and by contacting the bladder/rectal wall or even stool. Checking to insure all lines are clear, not kinked and flushed usually solves most of these issues. Occasionally the catheter needs to be changed or replaced.

Finally, an expelled catheter is usually obvious from seeing it on the floor and no longer in the patient! In addition, the effected catheter will have a massive downward drop in pressure reading, reflecting the loss of pressure on the catheter. Replacement is the correction for this as well.

As you can see, there are a slew of issues that can occur during UDS testing. Fortunately, many of these artifacts are easy to identify, especially with some training, will be readily noted during UDS. The key to identifying these issues is vigilance before the study begins and insuring the catheters are reading physiologic pressures, respond to cough and have a “live” tracing. Almost all issues during the exam can be rectified with insuring appropriate catheter placement and location, flushing the catheter and if needed replacing a catheter that is misplaced or expelled.