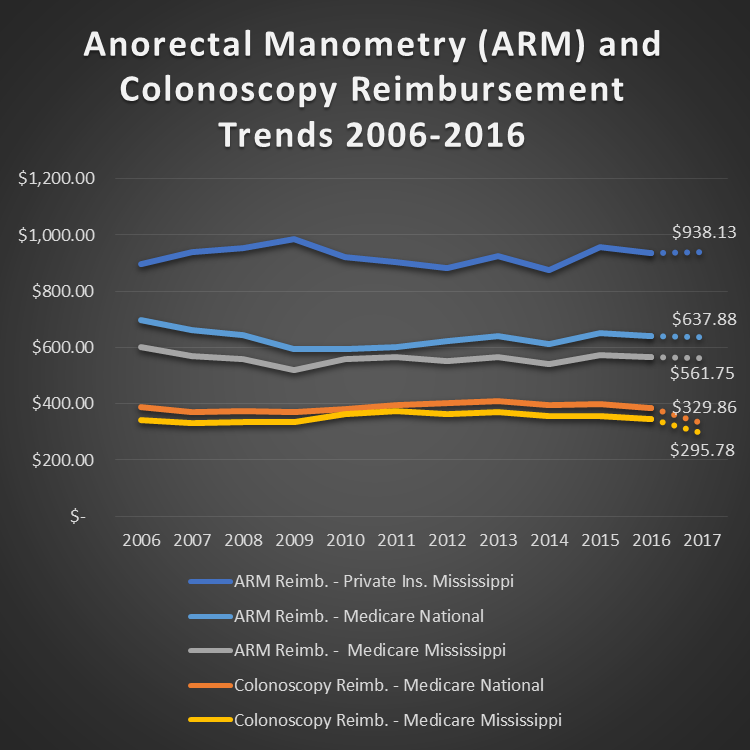 In addition, I attended a session on complications during screening colonoscopies.  I did not have a full grasp on the statistics for this. I did not realize one in two thousand (1:2000) patients typically incur a perforated colon due to colonoscopy procedures, and of the ones that do incur a perforated colon, approximately 20% die. ARM certainly does not incur the same risk. I am certainly not downplaying the importance of colonoscopies, but when one considers the higher reimbursement rates and the significantly lower risk, I am always puzzled by the fact that more gastroenterologist do not use ARM in their practices to aid in diagnosing the underlying causes of chronic constipation and fecal incontinence. It is possible that gastroenterologist do not use it more because they are concerned about relationships with local gastrointestinal surgeons that currently perform ARM, and they do not want to upset their relationship with their fellow surgeons by appearing to compete with them.  However, I believe this situation is going to change in the near future for two primary reasons. First, the reduction in colonoscopy reimbursement rates will push more gastroenterologist to look for new ways to generate revenue.  Gastroenterology practices will be adding other diagnostics to generate revenue, and ARM is one of these diagnostics.  Additionally, due to the U.S. “age wave” phenomenon, fecal incontinence will be an increasing patient occurrence, and gastroenterologists will have to include ARM to be properly handle this demographically driven demand increase.

Furthermore, with the Medtronic InterStim solution for fecal incontinence gaining more traction, I see more gastroenterologist adopting Interstim. Given InterStim’s effectiveness for fecal incontinence treatment and InterStim’s reimbursement rates combined with the usefulness and reimbursement rates for ARM, the adoption rate for ARM will be pushed even faster.

I welcome your thoughts on my assertions above.  If you are interested in BHN’s Anorectal Manometry solutions, click here.