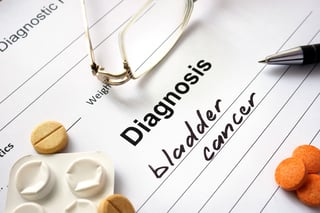 Bladder cancer is a relatively rare phenomenon in the United States – affecting fewer than 200,000 Americans annually – but can be serious when left untreated. Here, incontinence will be discussed relative to bladder cancer, which is a side effect of both the cancer itself and the treatment.

According to the American Cancer Society, approximately 79,030 new cases of bladder cancer were reported in 2016. The risk factors for this disease are primarily age and sex. Bladder cancer disproportionately affects men, and is most prevalent in patients over the age of 55. Additionally, people of Caucasian descent are more likely to develop bladder cancer than African Americans or Hispanics.

The most common symptom of bladder cancer is hematuria, or blood in the urine. This sign is typically the earliest symptom, and may be pronounced (i.e. the patient has dark or bloody urine) or unnoticeable except by urinalysis. In early stages, bladder cancer causes bleeding, but little to no pain. As the disease progresses, pain may also be experienced in conjunction with urination. Other symptoms include frequent urination, burning during urination, difficulty urinating, weak stream, and inability to urinate.

There are several tests used to diagnose bladder cancer. Cystoscopy involves the insertion of a cystoscope into the urethra to examine the bladder and urethra for signs of cancer. A biopsy may be performed during cystoscopy, in which a tool is passed through the cystoscope for collection of bladder cells for testing. This procedure is called transurethral resection of bladder tumor (TURBT), and is also sometimes used as a course of treatment for bladder cancer. Non-invasive diagnostics include urine cytology, in which a urine sample is analyzed for cancer cells. Imaging tests including CT urograms and retrograde pyelograms, which also allow for visualization of the urinary tract for signs of cancer.

There are several treatment options for overcoming bladder cancer, which is very treatable when caught early. Surgery is often a first line of defense, which is used to remove cancerous tissue. In addition to TURBT, cystectomy can be performed to remove all or part of the bladder. Chemotherapy is another way to treat bladder cancer, particularly when tumors are confined to the lining of the bladder and are at increased risk for recurring or progressing to a higher stage. If the patient is having his or her bladder removed, systemic chemotherapy is commonly prescribed. Radiation therapy may be appropriate as well, particularly when surgery is not a good option. Finally, in some cases immunotherapy may be necessary to trigger the patient’s body to fight cancer cells in either the bladder or the entire body.

Incontinence as a Symptom of Bladder Cancer

Incontinence as a Side Effect of Bladder Cancer Treatment

More frequently, urinary incontinence is a result of treatment for bladder cancer, especially after surgery where portions of the bladder are removed or resected. All forms of cancer treatment, including chemotherapy, radiation, and immunotherapy can also result in incontinence. For instance, radiation can cause fibrosis, stricturing, and tissue scarring that hinders blood supply and affects urination.

While 3D radiation can conform treatment to certain parts of the body, such as the prostate or rectum, the urethra cannot be spared. When this organ is exposed to radiation it can become dry and thin, as well as lose tissue layers. As the urethra continues to degrade over time, incontinence is likely.

Chemotherapy can cause cystitis and neurotoxicity, which may also affect the function of both the bladder and urethra. Oftentimes, cancer therapies are used in combination, such as radiation and chemo. In this instance, the risk of incontinence is increased, especially in older patients. For the elderly, decreased muscle tone in the bladder, decreased cardiac output, and a decreased inflammatory response can all contribute to urinary incontinence as a side effect of bladder cancer treatment.

If you would like a set of useful incontinence questionnaires to use in your practice, click on the button below.