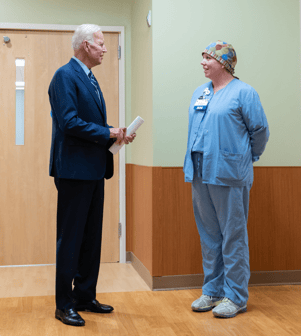 On January 20th of this year, Joe Biden was sworn in as the United States of America’s 46th president. Like any new leader of a country, this change in the White House meant many different things for various people, businesses, and entire industries.

The new administration is a tremendous shift from the previous one, changing the nation’s landscape across the board.

No more are these changes evident than in healthcare. Biden and his administration’s approach - even at first glance - is a totally different beast than former President Trump’s. With that said, how will this impact private practices across the US?

This blog will explore the above question and then delve into urology practices, specifically.

Biden’s Healthcare History was a Driving Force in his Win

The election this past fall was unprecedented for many reasons, the main one being it occurring during the pandemic. It’s not a far jump to assume that because of COVID-19, voters had health policy in mind when deciding on their preferred candidate.

Other than worrying about the virus itself, people found themselves canceling “non-essential” elective procedures and avoiding practices and hospitals to stay safe from infection. Beyond that, 2020 and its many challenges stretched healthcare systems beyond their capabilities. A heavy burden was placed on the industry as a whole.

Suddenly, care that was once readily available had boundaries placed in front of it. It’s only natural that people were concerned about their health, well-being, and how the nation’s leadership could impact both.

It should then be no surprise that now-President Biden won. After all, he was a vital component in drawing up the Affordable Care Act during the Obama era. It’s expected that this very same legislation will drive the new administration’s healthcare strategy for reform and policy.

What were Biden’s Pre-Pandemic Healthcare Promises?

A few of Biden’s pre-election healthcare promises were based on these ideas:

Containing COVID-19 was at the top of Biden and his administration’s list. Practices have had to deal with balancing their regular operations alongside surges of sick patients.

Biden’s focuses were rooted in hiring the right people, ramping up mask mandates, and increasing testing.

Biden’s focus in this area is crucial since the quicker the pandemic is dealt with, the better it will be for all medical practices.

As was mentioned earlier, the ACA or Obamacare is near and dear to President Biden’s heart. Involved in this policy is the individual mandate, which penalizes Americans for not having some form of qualifying health insurance.

While the ACA is still in effect, former President Trump got rid of the individual mandate in 2017 when he signed the GOP bill.

He also wanted to stifle cost-increases on abusively priced generic drugs and biotech. And he was looking to increase prices for drugs without competition.

A pre-campaign objective for President Biden was to lower the Medicare eligibility age from 65 to 60.

This would mean people could leave their commercial plans at 60 and move onto Medicare if it makes more financial sense.

These are only a few of the promises Biden made during his campaign. He was also focused on industry consolidation and surprise billing.

Where is Biden’s Administration Currently with Healthcare?

It’s still early days for the administration, but Biden’s team - thus far - appears to be consistent will their objectives.

Xavier Becerra is one of Biden’s critical members on his healthcare team and claims that “healthcare is a right.” He is a significant proponent of the ACA, and those efforts continue moving forward.

Biden has also signed an order mandating the wearing of masks. And vaccines have been rolling out at an expedited rate, proving a massive victory for the administration.

One idea currently still floating in the air is lowering the Medicare age, but that’s worth exploring in the next section.

How Will Biden’s Policies Impact Providers in Private Practices

If Biden and his administration lower Medicare eligibility, it could cost healthcare providers, including private practices. Provided your payer mix is between 60 to 65, that could be costly, as Medicare plans pay far less than commercial.

And while the ACA might be viewed as friendly to patients struggling with finances, the same can’t be said for private practices. For one thing, with more people needing care, it means stretching providers beyond their means.

During the Obama era, there was a 16.7% average pay cut for physicians due to the ACA. The problems stem from the lack of reimbursements for Medicare and Medicaid patients.

While these stats are dated, doctors only earned $20 for each Medicaid patient during the Obama era versus $260 for privately insured visits. As such, private practices lose money on public patients given the cost of overhead.

It’s worth reiterating that what Biden is pushing for is the individual mandate of the ACA to be moved forward. This would allow for a younger group of people to be in the risk pool, so it’s not only older people getting coverage.

Provided Biden gets the individual mandate passed, more people can access public care could hurt practices since they’ll be paid out by public insurance providers.

How Will the Biden Administration Impact Urology Practices?

Urology practices face a unique challenge in that their patient’s average age tends to be much older, at around 70.

Practices are already working with tons of patients on Medicare who aren’t paying through private insurers. Changing the eligibility age from 65 to 60 could be massively detrimental since that demographic offers a needed financial boost to cover the gap left by older patients on public plans.

The fact is that private urology practices had a very fruitful relationship with former President Trump, and there’s undoubtedly some murkiness with Biden.

While the individual mandate hasn’t been passed yet, it’s believed that a string of executive orders could push it through. That would make matters challenging for urology and other medical practices. The issue lies in trying to combat those tighter regulations while recovering from COVID-19.