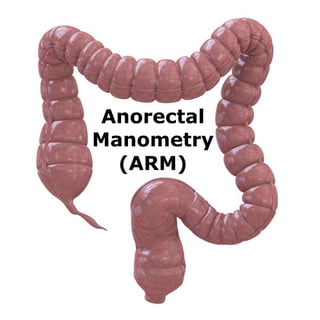 Anorectal manometry (ARM) is a common diagnostic tool for fecal incontinence and constipation. However, it can also be used within care pathways for a number of disorders, which will be described here.

What is Anorectal Manometry?

Anorectal rest and squeeze pressure profiling utilizes a 4-channel radial air-charged anorectal catheter that is inserted 4 cm into the patient’s rectum. The catheter is slowly removed one centimeter at a time while resting and squeezing pressures are recorded in the anterior, right, posterior, and left quadrants of the rectum.

Rectal volume measurements are performed by inserting a rectal balloon and slowly filling it with water to assess rectal sensations such as volume required for first urge to defecate and the maximum tolerable rectal volume.

Finally, a balloon expulsion test is typically performed, whereby a balloon is inserted into the patient’s rectum and filled with water or air. The patient is then asked to expel the balloon to determine whether anorectal dysfunction is evident.

An anorectal manometry probe is inserted into the rectum and the patient is provided visual or auditory feedback regarding his or her anorectal muscular function. Feedback is provided either by micro transducers that are attached to the manometry probe with a balloon, or a water perfused probe that contains multiple side holes.

In conjunction with operant conditioning, i.e. reinforcement of the proper behavior (in this instance, proper use of muscles), a person can retrain his or her bowels to overcome dyssenergia. Most patients are able to retrain their bowel habits with six, 1-hour biofeedback sessions during a 3 month time period.

There are numerous care pathways that utilize ARM and biofeedback. A summary of each disorder, as well as the manner in which ARM is used, will be described.

Fecal incontinence can occur as a result of poor sensation in the rectum, causing individuals not to realize a bowel movement is imminent. A successful form of treatment for delayed rectal sensation is anorectal manometry retraining.

This condition was diagnosed via balloon distension during an anorectal manometry test, and treatment also utilized this technique. Neuromuscular retraining with balloon distention had numerous positive outcomes in this study.

There was a significant correction of rectal sensory delay by 2 – 22 seconds, which resulted in the elimination of fecal incontinence in some patients. For 10 of 13 patients, an improved sensory threshold was reported. This study addressed a sensory abnormality that was previously unreported and suggested a simple solution that had promising results.

There are a number of treatment pathways available for people with fecal incontinence. One such technique is pelvic floor exercises with biofeedback utilizing ARM, which helps individuals learn to contract and relax the proper muscles for stool storage and release.

Transanal ultrasound is another option, which provides visual feedback for the retraining of the rectal muscles. Additionally, pelvic floor exercises with feedback from digital examination can also be performed. The manner in which these treatment options affect continence outcomes, quality of life, sphincter strength, and compliance were examined.

A total of 120 patients with mild to moderate fecal incontinence were placed into one of three treatment groups: biofeedback with ARM, biofeedback with transanal ultrasound, and pelvic floor exercises with feedback from digital examination.

Seven days after an initial 45 minute examination, patients attended monthly treatment sessions for five months. Each session was 30 minutes in duration and utilized sphincter exercises with biofeedback. Patients were also asked to perform exercises twice per day on their own.

Although there were no significant differences among the three care paths, this study showed that ARM is effective for improving sphincter strength and quality of life in patients with fecal incontinence. Among the three methods, ARM provides an option that could be more psychologically comfortable for patients than digital feedback, and involves less expensive equipment than when transanal ultrasound is utilized.

Ultimately, this study confirmed that pelvic floor retraining programs can be used to improve physiologic, clinical, and quality of life measurements for fecal incontinence sufferers in a short period of time.

Levator ani syndrome, also called levator spasm, chronic proctalgia, piriformis syndrome, puborectalis syndrome, pelvic tension myalgia, levator syndrome, or proctodynia, is characterized by periodic and intense rectal pain that is caused by spasm of the levator ani muscle. Typical symptoms include a dull ache located approximately 2 inches above the anus and a feeling of continual pressure or burning. In a study titled Biofeedback is effective treatment for levator ani syndrome3, treatment of this disorder with ARM was discussed.

A total of 16 patients (9 men and 7 women with an average age of 50.1 years) that suffered from levitor ani syndrome were treated with biofeedback for a period of 2 years and 3 months. Patients in this study had experienced pain for an average of 32.5 months. All patients underwent complete biofeedback with a manometric balloon. A follow up exam occurred approximately 12 months later. Before and after the study, pain score and anorectal physiology tests were administered.

Whereas all 16 patients required NSAID pain relief prior to the study, only 2 patients reported their use following biofeedback. After biofeedback there were no significant changes to the anorectal physiology parameters of the patients, and no side effects or regressions were reported with follow up examinations. Ultimately, biofeedback with ARM was shown to be effective for pain relief in levitor ani syndrome.

An overall improvement in symptoms was reported for 60% of the ARM group, while 90% experienced similar improvements in the EMG group. For both groups of patients, bowel function and abdominal symptoms significantly improved and continue to do so as observed in follow up appointments. In terms of efficacy, there was no difference between the two feedback methods.

While additional research may be warranted with larger groups of participants, this preliminary study indicated that both manometry and EMG are effective in improving symptoms of paradoxical puborectalis contraction as well as anorectal function.

Meningomyocele is a type of spina bifida where the spinal canal and backbone do not fully close before an infant is born. Children with this condition often suffer from fecal incontinence as a result of this disorder.

In a study entitled Use of Biofeedback in Treatment of Fecal Incontinence in Patients with Meningomyocele6, anorectal manometry as a biofeedback tool was studied. Fourteen children between the ages of 5 and 17 with meningomyelocele and poor bowel control first underwent anorectal manometry to determine anorectal functioning. Of the initial 14 children, eight of these patients underwent biofeedback conditioning.

A study titled Randomized, Controlled Trial Shows Biofeedback to be Superior to Alternative Treatments for Patients with Pelvic Floor Dyssenergia-Type Constipation7 was performed in order to determine whether biofeedback was more effective than the typical treatment for this disorder. Here, participants received either biofeedback treatment, diazepam, or received a placebo.

A total of 117 patients participated in a four week course of treatment that involved education and medical management on their disorder. Of the 84 patients that remained constipated, 30 patients were randomly selected for biofeedback training, another 30 patients were placed in a diazepam group, and the remaining 24 were given a placebo. All of the patients, regardless of their group, were trained to do pelvic floor muscle exercises during six biweekly one-hour sessions. However, only the biofeedback patients received electromyographic feedback during their exercises.

Prior to treatment, the three groups of patients did not differ significantly based on demographic, physiologic, or psychologic qualities, their severity of constipation, or their expectations of benefit.

The patients that underwent biofeedback has better results than the participants that received diazepam, with 70% reporting adequate relief of constipation versus 23%, respectively (38% of the placebo group reported adequate results). Additionally, the biofeedback patients reported more unassisted bowel movements at follow up exams than the diazepam and placebo groups.

Ultimately, this study provided definitive support for biofeedback retraining for pelvic floor dyssenergia and showed that this care path is essential for successful treatment of the disorder.

In some instances, ARM and biofeedback training may not provide better outcomes than conventional treatment, but can still have utility. Constipation is commonly seen in children, and it can be difficult to both diagnose and treat. In approximately 50% of chronically constipated children, the tendency to contract external sphincter muscles instead of relax them during defecation is observed.

A total of 212 constipated children (143 boys and 69 girls) that were referred to a pediatric gastroenergologist were randomly assigned to a conventional treatment (115 patients) pathway or a conventional treatment with manometry (97) pathway. Each patient in this study met at least 2 of the following criteria: less than 3 bowel movements per week, 2 or more soiling and/or encopresis episodes per week, occasional passage of very large amounts of stool every 7 – 30 days, or palpable rectal / abdominal fecal masses.

For children that underwent manometry (2 sessions per week), child and parent could watch the tracing on the computer screen, but no explanation was provided until after the study was complete. Treatment success was defined as 3 or more bowel movements per week and less than 1 soiling/encopresis episode per weeks with no use of laxatives.

Overall, there was no significant difference in the success rate observed between the two groups. In both instances, a significant increase in defecation frequency was observed following treatment. Among the conventional therapy with manometry group, 28% of patients had normal defecation dynamics at the beginning of the study, compared to 38% of patients at the study’s conclusion.

Ultimately, while ARM is useful for a number of care paths, the results from this study suggest that anorectal manometry does not have an additional educational effect on the clinical outcome of children that are chronically constipated.