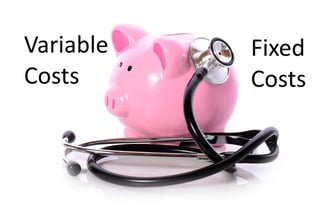 There are two primary cost structures in medical practices: variable costs and fixed costs. Here, both types of costs will be described, as well as examples of how they fit into the medical marketplace.

If you are looking to lower fixed costs, click the button for some ideas:

Fixed costs are ones which do not change and are generally part of long term agreements. For instance, rent and malpractice premiums are common examples of fixed costs in medical practices. Other examples include capital expenditures, building maintenance, and utilities.

A second example of fixed cost is staffing. Indeed, staff salaries commonly comprise 25% of a medical practice’s revenue. These costs are generally reduced by cutting overtime or the number of employees, which is not always the best practice for long term growth.  Many economists would argue that staffing is a variable cost, but if you have ever run a business you know that this is not the case.  Changing staffing costs (in particular permeant full time staff costs) is very difficult and takes so long that it for all particle purposes it is a fixed cost.

Variable costs are ones such as labor or materials which change with sales volume. Generally, companies save money by reducing variable costs. Examples of variable costs in medical practices include hourly laborers, or the cost of supplies that vary based on the number of patients seen or procedures performed. In the medical world, variable costs are tied directly to the patients.

Medical supplies are another example of variable costs, especially as their price commonly varies as a function of volume. For instance, the price per product will be lower in bulk, which makes this pricing structure appealing. However, medical practices must ensure that they are able to use the supplies before they expire, otherwise the savings is wasted. One strategy is to enter into a group buying agreement with another medical practice to reap the benefits of the variable cost of bulk products without the possibility of them going to waste.

A study conducted in a large hospital found that 84% of associated costs for the practice were fixed, while only 16% were variable1. While a large practice can generally cover the large percentage of fixed costs based on sheer volume of patients alone, smaller medical practices will struggle with this structure because a small change in patient volume can sink profitability.

In fact, small business and large ones alike now see fixed costs as a business liability. Medical practices can reduce the number of fixed costs by outsourcing diagnostic testing (i.e. eliminating the costs of purchasing equipment and training staff), partnering with other practices, and utilizing business infrastructure service companies. These changes all allow businesses to operate with primarily variable costs, which is better in the long run.

There are numerous advantages to the variable cost model. For instance, this structure significantly reduces the capital costs that are required to enter the medical marketplace. A lower capital cost directly reduces risk, especially for specialty medical providers.

Secondly, for small practices, a variable cost structure provides cost advantages relative to a larger competitor. Many small businesses are unable to compete with large practices, which requires greater attention to efficiency and throughput. However, when the majority of costs are variable, small practices are better able to control their revenues as the market fluctuates.

A variable pricing structure also provides an insurance policy of sorts when the market does change. For instance, if a small practice has a large percentage of fixed costs, even a minor change in the market can force doctors to close their doors permanently. Unfortunately, this situation can easily happen when a doctor employs numerous full time staff, has debt due to office space and medical equipment, and has fewer patients to be seen (or, decreased reimbursements).

Ultimately, it is important for medical practices2 to realize that the majority of costs are derived from buildings, equipment, labor, and overhead. Finding ways to reduce these costs to operate from a variable cost structure can provide stability and resiliency to the small medical practice owner in the future of medical uncertainty.