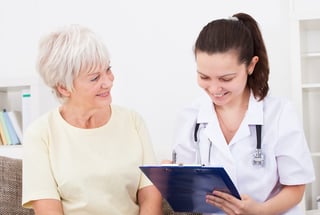 Urodynamic testing is the gold standard for incontinence assessment; however, this method is not without
drawbacks. For instance, data interpretation is reliant on a number of factors, including the clinician’s training, proper use of the equipment, and reproduction of the patient’s symptoms during testing.

In many practices, the inability of a patient to reliably verbalize and describe his or her symptoms can be immediately limiting to determining the exact problem. Here, the forms of incontinence, as well as reasons why patients avoid discussing their symptoms, are discussed.

There are four main types of urinary incontinence1. Each is different in subtle ways. They include:

The cause of urge incontinence2 is an overactive bladder. Here, patients frequently feel the need to urinate during both the day and night, and also experience the inability to control these urges. Urge incontinence has a number of causes and risk factors, including obesity, constipation, caffeine consumption, diabetes, and chronic pelvic pain.

Overactive bladder can be confused for urinary tract infection, neurological conditions, or other urinary tract disorders. Urge incontinence can be diagnosed via urodynamics by measuring involuntary bladder muscle activity as well as increased bladder pressure that results in leaking.

Stress incontinence3 occurs when small volumes of urine are lost during coughing, sneezing, exercising, laughing, or other movements that result in increased abdominal and bladder pressures. Functionally, the fascia that supports the urethra is weak, which causes the urethra to move downwards when abdominal pressure increases, resulting in the passage of urine. Stress incontinence is less common in men, but extremely common in women.

During urodynamic tests, urine analysis, cystometry, and post-void residual volume measurements all reveal normal functioning. However, further testing reveals urine leakage in response to an induced stress, such as coughing, in the absence of increased pressure in the bladder muscle in order to diagnose this disorder.

This form of incontinence occurs when urine is released from an overfull bladder. Typically, the urge to urinate is not experienced. Causes include bladder outlet obstruction, weak detrusor muscle contraction, and poor sphincteric coordination. Urodynamic assessments such as post-void residual urine and uroflow tests are performed.

Reasons for Patients Not to Properly Verbalize Incontinence Symptoms

An important component of diagnosing a patient’s urinary incontinence is understanding his or her symptoms. However, patients often poorly verbalize their experiences. There are a number of reasons this can be the case:

Many people are embarrassed to discuss their inability to control their bladder, even with a medical professional. In addition, the anxiety caused by tests which require a person’s genitals to be handled can lead to distraction and the temporary forgetfulness of all the symptoms experienced.

While the differences between the many forms of incontinence might be obvious to physicians, the variations can be subtle to patients. For instance, the patient’s only concern is typically that his or her bladder conspicuously leaked, not the instances that led to this discovery.

Many incontinent patients also suffer from dementia, which eliminates the ability to reliably discuss with a physician the symptoms that are experienced in regards to urinary incontinence.

For other patients, particularly women, urinary incontinence can become a way of life. When struggling with this disorder, patients can become forgetful how the symptoms are different from normal continence, and not realize the necessity to report certain symptoms.

Not Asking the Proper Questions

Finally, part of the blame for the patient’s inability to verbalize his or her symptoms falls on the physician. Asking the proper questions is important, especially when considering the embarrassment and lack of technical knowledge most patients experience.

How to Overcome this Problem

Overcoming a patient’s inability to reliably verbalize his or her incontinence symptoms include:

If a patient is experiencing urinary incontinence, the physician should provide detailed information on the differences between stress, urge, mixed, and overflow incontinence. Additionally, asking the patient to keep a bladder log with included prompts can be helpful.

During a urodynamic assessment4 the most important consideration is to ask the patient questions, particularly whether his or her symptoms have been adequately replicated during the test. Complete and well thought out questionnaires should be administered during any urodynamics assessment.  The questionnaire should be thoroughly documented and added to the patient’s file.

Common questionnaires used by many physicians include:

BHN typically uses the 3IQ-Extended for urodynamics test on women and IPSS for men.