Incontinence is an uncomfortable subject that affects millions of men and women worldwide. Traditionally, an incontinence sufferer would visit his or her primary physician and then be referred to a urologist, depending on symptom severity. Recently, a number of OB-GYN practices have begun offering incontinence care. Here, whether OB-GYN practices should provide care for incontinent patients will be discussed.

What are the Demographics of Incontinence?

Approximately 26 million Americans suffer from some form of incontinence. Of those 26 million incontinence sufferers, 20 million are women. Although the chances of a woman developing symptoms of incontinence increases as she ages, one in four women between the ages of 18 and 44 experience involuntarily urine leakage. 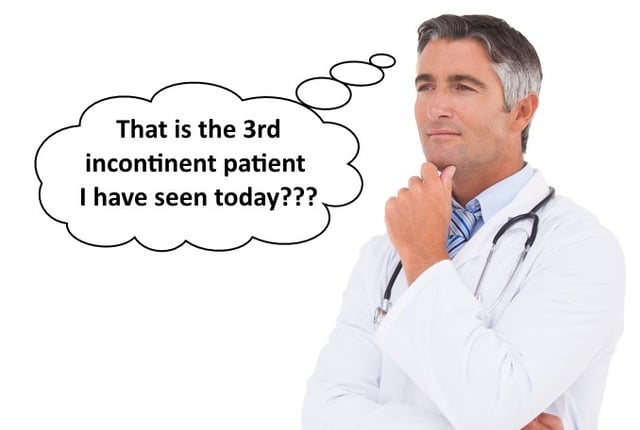 The most common form of incontinence, stress urinary incontinence, affects approximately 15 million women in the United States. Perhaps most alarmingly, a recent study found that women wait an average of 6.5 years before seeking medical treatment for this disorder.

What Types of Incontinence are Commonly Experienced by Women?

There are many types of incontinence that women experience, many of which can diminish quality of life. As previously mentioned, stress urinary incontinence1 is the most common type of incontinence experienced by women, which is characterized by a person’s inability to contain urine when stress is placed on the bladder or urethra – i.e. when coughing, laughing, sneezing, exercising, etc.

Urge incontinence2 is also known as “overactive bladder” and results in strong and sudden urges to urinate throughout the day and night. If a bathroom is not immediately found, women can struggle to hold these urges.

Overflow incontinence3 occurs when the bladder becomes full, but no urge to urinate is experienced. Therefore, urine involuntarily leaks from the bladder. This problem can occur as a result of blockage in the urethra or as a side effect of certain medications.

Additionally, another type of incontinence that affects many women and men alike but is not commonly discussed is fecal incontinence4, whereby individuals struggle to control their bowel movements.

What Are The Primary Causes of Incontinence?

A major contributing factor to incontinence in women is the trauma that is experienced during childbirth. Pelvic organ prolapse is a condition where organs in the pelvic region such as the bladder, uterus, vagina, urethra, small intestine, or rectum move from their normal regions within the body and place pressure on other organs.

This disorder can occur during pregnancy and result in the weakening of pelvic muscles as well as the inability to control bladder or bowels. Hysterectomy5 has also been shown to be a risk factor for urinary incontinence in women.

How is Incontinence Treated?

A first line of defense against urinary incontinence in women is typically the prescription of pelvic floor exercises, such as Kegels. Behavioral changes, such as keeping a bladder diary or attempting to re-train the bladder, can also be successful for incontinent patients. Medications may also be an option.

For instance, anticholinergics are useful for women with overactive bladders, while topical estrogen can be used to reinforce tissue in the vaginal and urethral areas. Tricyclic antidepressents such as Imipramine are sometimes prescribed. Medical devices such as urethral inserts and pessaries can be utilized, as well.

For approximately 10% of incontinence cases, surgery is an option. If a pelvic organ prolapse is to blame, a surgical repair can be performed to minimize pressure placed on the bladder, urethra, or other organs.

Sling procedures are common, whereby the vagina or urethra is given additional support in the form of a sling or mesh. Colosuspension is an option, as is the production of an artificial sphincter. Ultimately, there are many ways for women who experience incontinence to find relief.

As already described, incontinence is an issue that disproportionately affects women and is strongly linked to a topic with which OB-GYN practitioners are familiar: childbirth. For many women, incontinence is an embarrassing topic, one they are hesitant to bring up with most physicians. However, in a recent survey, when women were asked whether they would prefer to discuss incontinence with a urologist or a gynecologist, more than 75% said that a gynecologist would be preferable.

An OB-GYN – particularly one that has been working with the patient in question and is familiar with her health and birth history – not only has developed a special level of trust with that patient, but is better able to consider all of the risk factors affecting her diagnosis.

Furthermore, incontinence care can provide a financial boost to ObGyn practices that deliver it effectively to patients.  For OB-GYN practices that may be suffering from recent changes to women’s healthcare at the hands of the Trump administration, offering incontinence care could provide a necessary boost.   The financial boost can come from additional patient visits, the diagnostic testing required, the in-office treatments provided, and corrective surgeries.  For many OB-GYN doctors moving away from obstetrics and toward gynecology as their careers progress, incontinence care can easily become the most lucrative part of their practice.

One critical part of incontinence care for OB-GYN practices is performing urodynamics testing.  If you would like to know how to provide urodynamics testing in your practice without acquiring expensive equipment and adding staff, click on the button below.